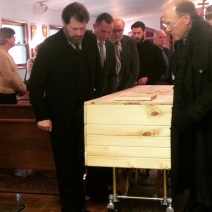 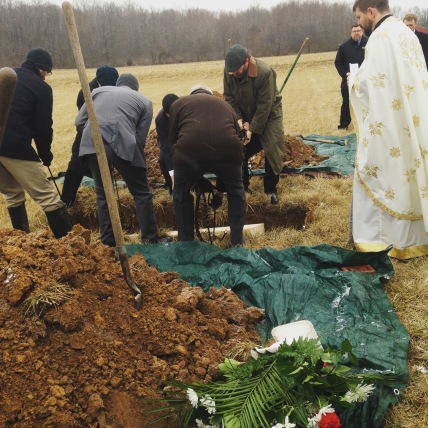 Because I want to venerate my sister’s body, I asked her if I could prepare it when she dies.

I mean if she had a green burial, I said. I asked two years after her first cancer diagnosis.  A little background here is warranted.

By Christmas that year, she thought she was done for. We sat in the TV room in the semi-dark whispering about her final wishes. I’d been helping my husband organize the burial society at church and she’d asked if I’d help her with the research and paperwork to prepare for her end of life. The lights of a Disney movie flickered and the cloying words of the songs cotton-candied our children’s ears. I explained the trainings I’d participated in, the on-line workshops (here), I helped her fill out the Everplans paperwork and promised to send the Maryland paperwork to review.

That was two years ago. Since then, she almost beat rectal cancer into remission. For nine blissful months, she lived NED, no evidence of disease. Last fall, a new cancer attacked her tongue, her throat, her lymph nodes. In early July, after recovering from a tongue reconstruction and radiation, she danced with her eight-year old son and six-year old daughter to the news that her new cancer appeared to be beat.

It’s August 15. In the past six weeks, she’s ridden the proverbial roller coaster. From “Honey I bought you Hamilton tickets for your November birthday” (a gift from her husband) to increasing pain and swelling in her neck. Two weeks ago, she learned a warped, tangly tumor is strangling her esophagus. Within this past week she had a trach installed because the tumor’s already closed 70% of her esophagus. This week, she’s fighting insurance to get the immuno-therapy her cancer team wants. Cigna is like the judge in the New Testament parable. It must be pestered into concession.

The truth is, she’s tired, in pain, but trying to live out her life fully to what seems like a very near end.

Panic has laid into me. Now that her preparations seem urgent, too needful again, I realize that my wishes might be strange, or estranging, to my friends and family. After all, we’ve acculturated to the modern hiring out of all death services. I get the desire to reduce stress by having anyone else but family (or friends) do the work. I’ve talked with Naomi many times in the past four years about her burial wishes. She’s continued to acquiesce to me preparing her body as long as it doesn’t heighten her husband’s stress. But there’s something to letting the willing loved ones do some of the work. In part because it reduces the enormous cost of burial. In part because it reduces the some of our grief.

That’s why I want to explain why I long to do this.

When I offered, the idea scared the bejebus out of me. I didn’t know how I’d handle it. Mental training, talks with parishioniers, and lastly an unexpected death in our parish community prepared me. Billy’s death in January proved to be the final obstacle faced.

Billy. 51. Father of three. He and his wife Susan had educated my son for years in their home as part of a classical school co-op. Billy served with my husband and me on the board of a local non-profit. He attended the parish where my husband is priest. He and my husband were good friends. They’d spend hours talking music, like the great years of A Tribe Called Quest and Prince. He taught me about Wendell Berry and Arvo Part. He died while I was marching in Washington.

But being fifty-one, Billy’s body underwent a coroner’s inquest. We didn’t know if we’d be able to talk the required funeral director into not embalming, let alone dressing Billy without cosmetics and letting us lay him out for the traditional overnight vigil.

The times, they are a’changin’. The director transported Billy’s body, put on a suit, put him in the plain pine box that Bill, our resident coffin builder, put together. He helped direct traffic from the church to the church cemetery. And we got to do much of the traditional burial. We count it blessed we could do the following:

Dianne sang to keep warm. I wrapped myself around his daughters in their soft dresses with hemlines too high for the cold. Someone tried to drag the dwindling pile of frozen clay by pulling up the corners of the tarp onto which it had been deposited. The tarp ripped. I felt guilty for not giving up the Hot Hands I clutched in my mittens but I knew my Raynauds Syndrome would give me frostbite without them. Finally the hole mounded higher than the remaining brown clods next to it. Most of us tromped back to our cars. I heard later that a few of Billy’s male friends polished off a bottle of his favorite whisky with toasts and poured out a bit for him.

After we thawed at the mercy meal, we began to live again. There we admitted that the past week had been hell, that the past forty-eight hours had been hard work, and that all of it helped us start healing.

We thanked Susan and the kids of the opportunity to do Billy’s funeral. Because we worked hard, when it came time, at the end of the burial service, to venerate his body as we do the icons of saints, it seemed natural to kiss him. He looked like himself, not someone made over. He looked asleep. We wept as we crossed ourselves and laid light kisses on his hands. We waited out in the fellowship hall cringing at the whanging of Bill’s hammer as he nailed the top on. The local funeral director must have thought us strange that we wanted to hear the pounding that throbbed like our ache. He must have thought us strange, staying in the freezing cold until it felt fruitless, moving dirt from one pile to the next. He watched us try to move all the bits we could.

I want to do this kind of hard work when my sister dies. I know now that it will speed the healing, like when I decide to take a run though my recent cold or infection lingers. The pain flairs intensely until the endorphins kick in. Within a day or two, it’s eased. I’m amazed at this intense response of my symptoms as my body exerts itself.

I hear from friends who’ve washed and dressed their mothers’ bodies that it defied sense at first. Granddaughters almost refused to come, said they’d sit in the room and not help, but ended reading the Psalter or helping paint nails. In the end, touching the body felt like the final act of love, not a strange flirtation with disease or necrosis.

They venerated their beloved.

I want to venerate my sister. To venerate: to revere, to adore, to regard with esteem.

My sister is an icon of her Creator. Every time I go to the sanctuary to pray, I venerate my Creator. I revere, esteem, adore Him. I do this by showing up and I do this literally. I physically approach an icon of Christ, bow, kiss his hand and then I move to the icons of those He created. His mother. Notable saints. I bow. I kiss hands. Why? Because He made all of us. He redeemed us all. When our bodies die, as his did, our bodies deserve the same treatment his received. He came in the flesh. What He experienced, we can experience. His friends took him from the Cross. They swaddled him in fine linen and anointed him with the traditional oils and incense. Myrrh and Frankincense most likely. They laid him out in his tomb. They kept vigil. Psalms are recited traditional in Jewish custom. They did this with mourning and heavy-hearts. They lacked the funds to hire ululators. Professional chanters would have been strange considering their poverty and his shamed death.

They did this and kept vigil. Not a word of complaint is recorded among the four varied accounts of the gospels. Doing the work themselves was a given. And a blessing. For when the women disciples of the Lord came to anoint him again, they became the first witnesses of the truth and reality of what he offered us all. Resurrection.

Resurrection. He brought it to us. We venerate him. We believe in it. We receive it. We venerate in hope of it. This is why I want to prepare her body.